SAIMAA IS IMPORTANT TO US

Savonlinna-Risteilyt strives for responsibility and the lowest possible environmental effect.

Saimaa is important to us!

One man's trash is another man's treasure. 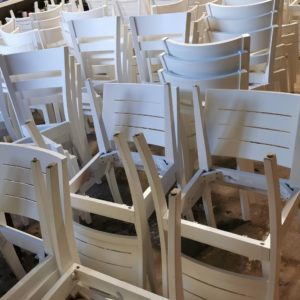 We strive to minimize all waste. Purchasing products and ingredients we aim to minimize the amount of packaging waste and possible wastage of ingredient itself. We sort and recycle the generated waste where possible: for example, biowaste, cardboard, metals and glass find their way to the right waste bin.

In our own purchases, we support recycling, and we strive to find renovation supplies as well as other material purchases as recycled as possible. For example, the new chairs coming to the Elviira ship in the summer of 2021 have already lived their lives in the service of two other restaurants, and now with a little make-over they can still see the world from the waves of Lake Saimaa. The carpets are also recycled. We received carpets, that meet the fire requirements, in good condition from a renovation site.

We want to reduce energy consumption. 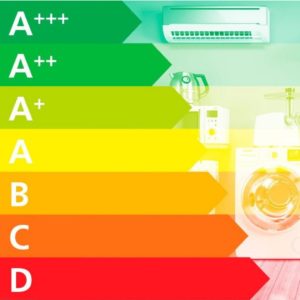 Refrigeration equipment plays a major role in energy consumption. We have updated the equipment to be newer and more energy efficient, and we are optimizing their use. If all the ingredients can fit in one refrigerator, we can turn off the other.

In the future, solar panels will be an option for our energy procurement. In sunny Lake Saimaa, we could collect solar energy to cover the energy consumption of refrigeration equipment. On top of the ship’s roof canopies is a perfect place for solar panels to soak in the sunshine.

Use all means to reduce the use of fossil fuels. 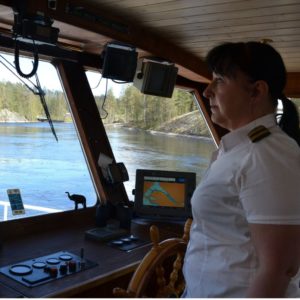 Currently, m/s Ieva and m/s Elviira run on light engine fuel oil (MDO). Ship engines are models of this millennium, so their technology has taken energy efficiency and emissions into account. The engine of both ships can be adjusted by a computer to optimize its consumption.

Ships’ engine power has been optimized to consume less fuel, save the engine and extend its life. We basically drive at hull speed, so that the ship does not make extra accelerations or other sudden movements that would consume more fuel again. So we follow the principles of proactive driving when navigating the waters.

Proactive driving means we have an ecological and safety first -mindset, taking other water traffic into account from the captain’s perspective. Our key goal is to drive safely, economically and fuel-efficiently. A safe and proactive approach leads to a lower risk for accidents and saves the environment and the ship itself. Proactive driving creates safety for all water traffic.

At present, Elviira's average consumption is about 40 liters / hour, of which 18 liters go to the main engine and the remaining 22 liters through the generator to the ship's electrical equipment, for example to refrigeration equipment. Consumption average is 0.8 dl / passenger.

We will switch to using biofuels as the distribution network covers our area. In the future, gas, hydrogen and electricity will also be an option for fuel. According to current estimates, annual fuel costs would increase by 3-4% as a result of switching to gas or hydrogen. In addition, there will be the cost of tens of thousands of alterations and equipment. The cost of switching to electricity would be 100 000 euros. We will follow the situation and keep all options open.

The company's transports are already arranged with a car using biogas. The use of biogas as a fuel reduces a car's greenhouse gas emissions by about 85% compared to petrol, taking into account emissions throughout the life cycle of the fuel. Driving with biogas instead of petrol reduces CO2 emissions by 2,940 kg / car per year. The calculation has been made by Lappeenranta-Lahti University of Technology. 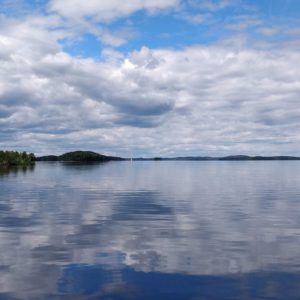 The ships have a water pressure reduction that reduces water consumption. The water consumption of ships' toilet seats has also been reduced. In Ieva, the toilets are flushed with lake water, which goes through the septic tank into the municipal sewage network, which means that no purified water is needed at all. In Elviira, this development measure is still to come. A single toilet seat draws about 4 liters of water, which is a significant amount of water annually. A practical way to reduce the water consumption of ships is to make Elviira's toilets flush with lake water.

In Saimaa for example hand wash water could theoretically be lifted from the lake, but regionally changing occurrence of blue-green algae would bring too big health risk if we were not always completely sure about the blue-green algae situation. However, the most important thing is the safety of our customers, and we do not want to take the risk of exposure to blue-green algae and so clean water is taken from the municipal water supply network.

There are also restaurants on the ships, so there is washing-up to do. Ships’ dishwashers have been upgraded to water-saving models. The machines also select the most environmentally friendly washing program when possible.

We choose eco-labeled dishwashing detergents for professional use. Because we take care of Saimaa for our part, all wastewater from our ships is led into the municipal wastewater system and is not drained into Lake Saimaa.

The cleaning detergents we use have eco-labels. We use as much lake water as possible for cleaning, depending on the possibilities and purpose, which reduces the amount of clean water we use.

Providing services in an environmentally friendly manner and respect for nature

“Waterway doesn’t wear out” so as we slide past we leave only a small wave as a sign that someone’s been here. Also when we go ashore we do not leave any traces in nature and our professional crew moors the ship at the pier or on a natural shore without consuming nature.

Our own garbage finds its way into the trash cans and we don’t leave them behind. In addition, we provide our customers with rubbish bins in easily accessible locations to prevent their rubbish from ending up in the environment. There is wind on the decks of the ships, so during the cruises, our staff circles the deck regularly, collects debris from the tables and offers to take the wrapping paper with the customer in their hands.

In ships’ kitchens local food is a normal practice. 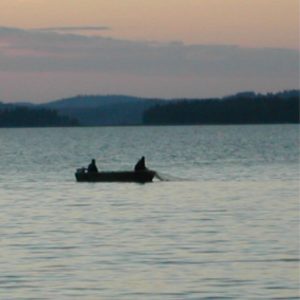 On our menu local food is already a normal practice and we use organic products whenever the situation and availability allows it. We also want to promote biodiversity through the dishes we serve, and for example by fishing and serving roach we can help reduce the eutrophication of Lake Saimaa.

Fishing roach protects the plankton in the lakes, which when left in the lake can act as a carbon sink and prevent eutrophication. Pike regulates the number of roaches, but again eutrophication caused by roaches weakens the spawning environment of pike and so reduces the number of pike. In this way, the structure of the fish has been distorted, which we can also influence by fishing roach and cooking delicious dishes on board. At the same time we support the local fishing culture and industry.

We always offer our customers the opportunity for vegetarian or vegan dishes.

To prevent loss, we optimize portion sizes and for example during buffet meals the ship’s chef prepares more food as it goes. We have considered the possibility of loss in the number of different dishes we serve: the more different dishes on the table, the greater the chance of loss. For this reason, we invest in quality rather than quantity.

In Elviira and Ieva every possible dish is made entirely by our chefs, so the chefs have also been able to refine the recipe to avoid loss. If an ingredient is left over, it will be utilized later in another context.

When serving coffee products we prefer biodegradable or cardboard dishes when the use of glasses or porcelain plates is not recommended due to the risk of breaking.

For us the environment is very important. 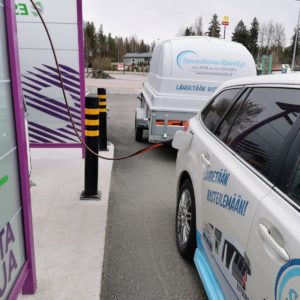 During the spring of 2021 Savonlinna Cruises will receive the result of a carbon footprint measurement. The measurement has been carried out as a thesis at the Turku Maritime School.

Once the results are in they are mirrored into our practises: we will explore where we can improve and take the required actions.

There are many opportunities and we are exploring the best option for us and our customers to reduce and compensate our carbon footprint.

For us the environment is very important and we want to make it visible to our customers and other partners as well.

Ships will be equipped with televisions with a slide show showing for example the result of a carbon footprint measurement and other information on environmental responsibility.

"You can not really miss that castle." 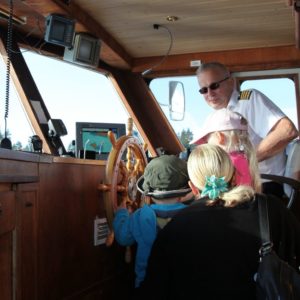 We follow the same routes as ships, boats and waterways have been for centuries. During our travels, we often come across the ongoing timber rafting, which is the most environmentally friendly mode of transport for raw wood and which is also a wonderful experience of presenting local culture to local and other customers from Finland and abroad.

We are a strong local company. Most of the employees are local and we also favor local operators in our collaborative projects, such as the production of marketing materials and souvenir products, such as postcards.

One great local element is a huge part of our tourism products: Olavinlinna Castle. In four different languages, the route description of our ships tells the history of the castle and the present day, the story of the settlement built around the castle, and for example in Pihlajavesi passengers hear about the specialties of the surrounding nature.

Passengers often arouse interest in our area and they approach the staff with additional questions: does Laitaatsalmi really not freeze at all, does everyone have their own boat, how many ferries there are in the area. We have also completed a mobile application to provide customers with additional information about the landmarks they see during the cruise.

For us every member of the local community and customer is equal. We face everyone with a smile on our face and do our best to provide everyone with accessible service experience and along with it a relaxing trip to the waves of Lake Saimaa.

In cruise tourism, safety is everything. 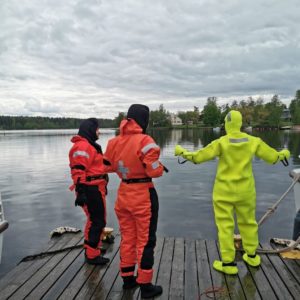 In cruise tourism and shipping, safety is a vital part of responsibility.

Our ships are regularly approved by the maritime authorities and are periodically maintained. The ships have life rafts and life jackets for all passengers and they come in different sizes, e.g. babies have their own vests reserved.

The crew is trained for situations requiring first aid, fires, the ship's own safety and rescue.

Safety and comfort are also a priority for our captains, so in high winds the ship may have to change course to maintain travel comfort, which may delay arrival to the port.

At other times we offer charter cruises on request, so ask for an offer!

How about a cruise around the town?

Join us a theme cruise?

Welcome on a Cruise!